We have 137 guests and no members online

It is our utmost pleasure to invite you to attend and contribute to both the 25th annual meeting (25th anniversary of ARABMED Conferences) and the 21st Annual Conference of the Union of Arabs Doctors and Pharmacists in Austrian, which is convened in Vienna, 30 October-1 November 2009.

Submissions for presentation at this conference have been made from a wide range of European and Arab universities and hospitals. We are expecting delegates from 8 countries (Germany, France, UK, Ireland, Austria, Iraq, Palestine, Jordan and Syria). Hence, we are looking forward to a unique, stimulating and scientifically rewarding conference. Our scientific program is rich and we expect it to be interesting and relevant to all participants. We also hope that you are able to meet old and new colleagues in these sessions and create lively discussions in which you can learn from each other.

We at the Arab Medical Union in Europe very much hope that this gathering will enhance our scientific commitment and long-term cooperation between all of us. So far, the Union has held 25 scientific conferences in various European and Arab capitals, which were attended by nearly 2000 European and Arab specialists counting more than 400 Prof.essors and distinguished scholars.

Let me take this opportunity to praise those who wholeheartedly engaged in the development of this Union. This includes some early pioneers who built the road with confidence and cemented the foundations of our work as well as provided the means of success and sustainability. But it also includes the second generation which has built on this solid base and overseen the expansion of activity and directed the Union towards new horizons.

On behalf of the Arab Medical Union in Europe, I extend our sincere thanks to Prof.essor Prim. Dr. Walter Dorner, President of Austrian Medical Chamber, Dr. Eva-Maria Hobiger as Medical coordinator of Society for Austro – Arab Relations, Prof. Dr. Aly Mishal Representative of FIMA Dr. Michael Wahbe The Ambassador of the Arab League in Austria and Dr. Keilani, President of the Union of Arab Medicals and Pharmacists in Austria, and the representatives of the Danube University Krems. We would also like to thank the members of the scientific and organizing committee for their hard work. Last but not least, thanks are due to the participants from Arab countries and all presenters who have submitted their work and to our delegates who are behind the success of this scientific gathering. A warm welcome to all of you and best wishes for an exciting conference! 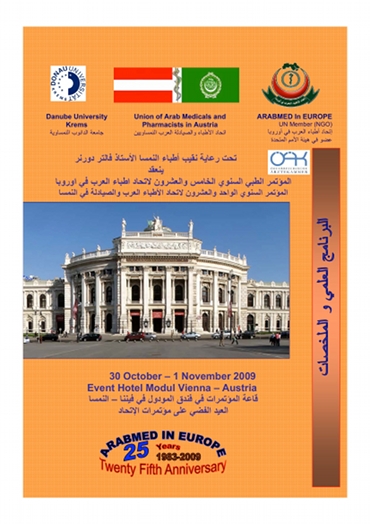